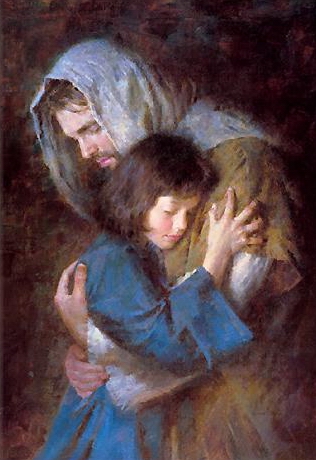 
Quotes about Forgiveness - Read passages that offer biblical guidance on forgiveness and how important it is to forgive others as we have been forgiven by the blood of Christ. Read verses from the Holy Bible about forgiveness in relation to God, Jesus Christ, and the Christian faith.

Use our Bible verses by topic listing popular verses from the Old and New Testament.

Jesus Is Our Model Of Forgiveness

And when they came to the place that is called The Skull, there they crucified him, and the criminals, one on his right and one on his left. And Jesus said, “Father, forgive them, for they know not what they do.” And they cast lots to divide his garments.

Jesus Will Forgive Us Our Sins

Why does this man use such words?” they said; “He is blaspheming. Who can pardon sins but One--that is, God?”... Jesus asked them, “Which is easier?--to say to this paralytic, ‘Your sins are pardoned,’ or to say, ‘Rise, take up your mat, and walk?’ But that you may know that the Son of Man has authority on earth to pardon sins”--He turned to the paralytic, and said, “To you I say, ‘Rise, take up your mat and go home.’”

And whenever you stand praying, forgive, if you have anything against anyone, so that your Father also who is in heaven may forgive you your trespasses.

Then Peter came up and said to him, “Lord, how often will my brother sin against me, and I forgive him? As many as seven times?” Jesus said to him, “I do not say to you seven times, but seventy times seven.”

But I say to you, Love your enemies and pray for those who persecute you,

Because God Has Forgiven Us, We Must Forgive Others

bearing with one another and, if one has a complaint against another, forgiving each other; as the Lord has forgiven you, so you also must forgive.

Stephen Was An Example Of Forgiveness

And as they were stoning Stephen, he called out, “Lord Jesus, receive my spirit.” And falling to his knees he cried out with a loud voice, “Lord, do not hold this sin against them.” And when he had said this, he fell asleep.

Paul Was An Example Of Forgiveness

At my first defense no one came to stand by me, but all deserted me. May it not be charged against them!

Joseph Was An Example Of Forgiveness

As for you, you meant evil against me, but God meant it for good, to bring it about that many people should be kept alive, as they are today. So do not fear; I will provide for you and your little ones.” Thus he comforted them and spoke kindly to them.

Blessed are the merciful, for they shall obtain mercy.

Forgive us our debts, as we also forgive our debtors.

Bless those who persecute you; bless and do not curse them.

Forgive us our sins, for we ourselves also forgive everyone who is indebted to us. Bring us not into temptation, but deliver us evil.

Confess therefore your sins one to another: and pray one for another, that you may be saved. For the continual prayer of a just man availeth much.

Peter said to them, “Repent, and be baptized, every one of you, in the name of Jesus Christ for the forgiveness of sins, and you will receive the gift of the Holy Spirit.

But I say to you, Do not resist the one who is evil. But if anyone slaps you on the right cheek, turn to him the other also. And if anyone would sue you and take your tunic, let him have your cloak as well. And if anyone forces you to go one mile, go with him two miles. Give to the one who begs from you, and do not refuse the one who would borrow from you.

Beloved, never avenge yourselves, but leave it to the wrath of God, for it is written, “Vengeance is mine, I will repay, says the Lord.” To the contrary, “if your enemy is hungry, feed him; if he is thirsty, give him something to drink; for by so doing you will heap burning coals on his head.” Do not be overcome by evil, but overcome evil with good.

“But I tell you who hear: love your enemies, do good to those who hate you, bless those who curse you, and pray for those who mistreat you. To him who strikes you on the cheek, offer also the other; and from him who takes away your cloak, don’t withhold your coat also. Give to everyone who asks you, and don’t ask him who takes away your goods to give them back again. “As you would like people to do to you, do exactly so to them. If you love those who love you, what credit is that to you? For even sinners love those who love them. If you do good to those who do good to you, what credit is that to you? For even sinners do the same. If you lend to those from whom you hope to receive, what credit is that to you? Even sinners lend to sinners, to receive back as much. But love your enemies, and do good, and lend, expecting nothing back; and your reward will be great, and you will be children of the Most High; for he is kind toward the unthankful and evil. Therefore be merciful, even as your Father is also merciful. Don’t judge, and you won’t be judged. Don’t condemn, and you won’t be condemned. Forgive, and you shall be forgiven.

Good sense makes one slow to anger, and it is his glory to overlook an offense.

To the contrary, “if your enemy is hungry, feed him; if he is thirsty, give him something to drink; for by so doing you will heap burning coals on his head.”

Then his master summoned him and said to him, ‘You wicked servant! I forgave you all that debt because you pleaded with me. And should not you have had mercy on your fellow servant, as I had mercy on you?’ And in anger his master delivered him to the jailers, until he should pay all his debt. So also my heavenly Father will do to every one of you, if you do not forgive your brother from your heart.”

And the prayer of faith will save the one who is sick, and the Lord will raise him up. And if he has committed sins, he will be forgiven.

And you, who were dead in your trespasses and the uncircumcision of your flesh, God made alive together with him, having forgiven us all our trespasses, by canceling the record of debt that stood against us with its legal demands. This he set aside, nailing it to the cross.

Anyone whom you forgive, I also forgive. What I have forgiven, if I have forgiven anything, has been for your sake in the presence of Christ, so that we would not be outwitted by Satan; for we are not ignorant of his designs.

“Blessed are those whose lawless deeds are forgiven, and whose sins are covered; blessed is the man against whom the Lord will not count his sin.”

And when he had said this, he breathed on them and said to them, “Receive the Holy Spirit. If you forgive the sins of anyone, they are forgiven; if you withhold forgiveness from anyone, it is withheld.”

I am writing to you, little children, because your sins are forgiven for his name’s sake.

Blessed is the one whose transgression is forgiven, whose sin is covered. Blessed is the man against whom the LORD counts no iniquity, and in whose spirit there is no deceit.

And no inhabitant will say, “I am sick”; the people who dwell there will be forgiven their iniquity.

If we confess our sins, he is faithful and just to forgive us our sins and to cleanse us from all unrighteousness.

I am, I am he that blot out thy iniquities for my own sake, and I will not remember thy sins. Put me in remembrance, and let us plead together: tell if thou hast any thing to justify thyself.

Repent therefore, and be converted, that your sins may be blotted out,

Come now, let us reason together, says the LORD: though your sins are like scarlet, they shall be as white as snow; though they are red like crimson, they shall become like wool.

Therefore, if anyone is in Christ, he is a new creation. The old has passed away; behold, the new has come.

In him we have redemption through his blood, the forgiveness of our trespasses, according to the riches of his grace,

then he adds, “I will remember their sins and their iniquities no more.”

To the Lord our God belong mercy and forgiveness, for we have rebelled against him.

He has delivered us from the power of darkness and transferred us to the kingdom of his beloved Son, in whom we have redemption through his blood, the forgiveness of sins.

as far as the east is from the west, so far does he remove our transgressions from us.

Please pardon the iniquity of this people, according to the greatness of your steadfast love, just as you have forgiven this people, from Egypt until now.” Then the LORD said, “I have pardoned, according to your word. But truly, as I live, and as all the earth shall be filled with the glory of the LORD,

Who is a God like you, pardoning iniquity and passing over transgression for the remnant of his inheritance? He does not retain his anger forever, because he delights in steadfast love. He will again have compassion on us; he will tread our iniquities underfoot. You will cast all our sins into the depths of the sea.

Thus therefore shall you pray: Our Father who art in heaven, hallowed be thy name. Thy kingdom come. Thy will be done on earth as it is in heaven. Give us this day our daily bread. And forgive us our debts, as we also forgive our debtors. And lead us not into temptation. But deliver us from evil. Amen. For if you will forgive men their offences, your heavenly Father will forgive you also your offences. But if you will not forgive men, neither will your Father forgive you your offences.

For this is my blood of the new testament, which shall be shed for many unto remission of sins.