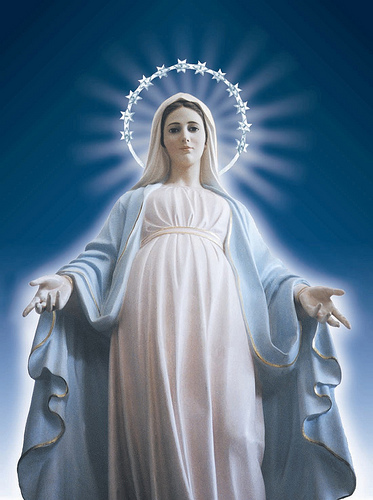 Signs and Wonders – to deceive if possible even the elect. Mark 13:22


Garabandal is definitely a false apparition. We believe this for a number of reasons.

First, according to a friend of ours who has studied it (we have not yet been able to), the message states: "the Pope will reconvene the Council and it will be a great event in the Church." This means that Garabandal apparently refers to Vatican II as something that will be a "great event" in the Church and Paul VI as a "Pope" - both of which are totally false and, if stated in the message, prove without any doubt that Garabandal was a false apparition of the devil.

Second, all of the "seers" at Garabandal are in the Novus Ordo sect (a bad fruit) and none of them pursued religious vocations. (Most of those who have visions such as this, like the real Sister Lucy of Fatima, pursue religious life). The original apparition occurred when they were stealing apples – not usually an activity that would be rewarded with a visit from the Mother of God, I would say. The "seers" also walked backwards, something that is suggestive of Satanic influence.

We believe that the purpose of the false apparitions of Garabandal was to focus people on the physical chastisement – a great warning, miracle, and ball of redemption – and direct people away from Satan's real attack, which concerns our Faith, not physical chastisements. So, while people are waiting for what they think will be the "real" chastisement (what they expect to be a physical one) and remain in the false sect, the true chastisement (a spiritual one, the Vatican II sect) is already upon them and has (already) almost reached its consummation.

Let it be known that some of the things the four girls at Garabandal, Spain claimed the Virgin Mary told them, have proven to be false and as a consequence cannot possibly have emanated from her, but from the Father of Lies, Satan himself, so as to even deceive the elect - if it were possible....

One of the girls, Conchita, claimed, in 1962 , 'Mary' said there would be only THREE more 'popes' after the death of John XXIII, and then the end of time .....WRONG ! We are up to 'pope' number four, unless of course, they reckon Benedict XVI is an antipope - I don't think so!.... And, my clock is still ticking!

Russia will be converted as a result of the miracle ( yet to come ) .....WRONG! Russia was consecrated by Pope Pius XII in 1952, and as a result, as we know, was 'converted' ( end of persecutions)

The Council would be a GREAT Council ( Vatican II) according to 'Our Lady' ....WRONG! For the true Catholics it was bad news and a sign of the beginning of the End Times in line with Fatima -Great news however for the anti - Catholic element already inside the Church at that time - and so for Satan, and the enemies of the Catholic Church, it truly was a Great Council!

Both Paul VI and John Paul II, met with the seers and praised Garabandal, and said that "the Church blesses them."... enough said!

Conchita will announce the date of the "promised miracle'' 8 days in advance - so she is the one to be watching out for - of course, it will never happen!

Joey Lomangino to receive new eyes at the miracle to occur in Spain - Joey will be 80 years old this year, and a sick man apparently.....again, as above!

Followers of the false apparitions of Garabandal tend to be of the "conservative" Novus Ordo type, who are generally concerned about abuses that are rampart in the Vatican II Church, but in reality know little about the teachings of the Catholic Church, because of bad will on their part in general!
Our Lady