Our Lady of Fatima

The Message of Our Lady of Fatima: a heavenly sign marking the beginning of the end times and a prediction of apostasy from the Church 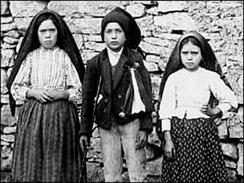 Lucia, Francisco and Jacinta of Fatima

You have seen hell where the souls of poor sinners go. “Fr.” Mario Luigi Ciappi, papal theologian to Pope Pius XII: “In the Third Secret [of Fatima] it is foretold, among other things, that the great apostasy in the Church will begin at the top.”

The message and miracle of Our Lady of Fatima in 1917 is one of the greatest events in the history of the Catholic Church. Since the miracle at Fatima, which occurred on Oct. 13, 1917, was predicted to take place in advance, and was fulfilled in the presence of almost 100,000 people, it’s probably the greatest miracle in Catholic history outside the Resurrection. The Fatima miracle and message also bear tremendous significance for our topic: The Truth about What Really Happened to the Catholic Church after Vatican II. Beginning on May 13, 1917, the Mother of God appeared six times to Jacinta (age 7), Francisco (age 9) and Lucia (age 10) in Fatima, Portugal. The Blessed Virgin told the children to pray the Rosary every day; she showed them a vision of Hell; and she made prophecies about World War II and the expansion of Communism (“the errors of Russia”), among other things.

Read whole article: The Message of Our Lady of Fatima: a heavenly sign marking the beginning of the end times and a prediction of apostasy from the Church.