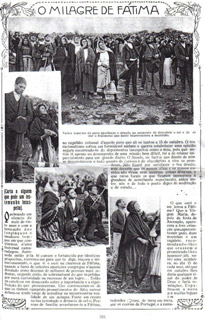 “Terrifying Event !
How the sun danced at midday in the sky of Fatima.”

“Terrifying Event !
How the sun danced at midday in the sky of Fatima.”

"Along the road from the Chao de Macas station, we met the first groups going to the holy place, a distance of more than ten miles. Men and women walked along barefoot, with the women carrying their bags on their heads, topped with their heavy shoes, while the men leaned on their sturdy staffs and carried umbrellas as a precaution. They seemed unaware of all that happened around them, disinterested in either the landscape or the other wayfarers, saying the rosary in a sad rhythm, as if immersed in a dream . . . With slow, cadenced steps, they threaded their way along the dusty road, among pine groves and olive orchards, so that they might arrive before nightfall at the place of the apparition. There, in the open, under the cold light of the stars, they planned to sleep and get the best places next day near the blessed holm oak, and thus have a better view.

"As they entered the town of Vila Nova de Ourem, some women, already infected with the germ of atheism, joked about the great event. 'Aren't you going tomorrow to see the saint?' one asked. 'Me? No! Not unless she comes to see me!' They laughed heartily, while the devout passed on, indifferent to anything that was not the motive of their pilgrimage.

"Only by a sheer stroke of luck or kindness could lodging be found in Ourem. All night long, the most varied type of vehicles moved into the town square, carrying the faithful and the curious, besides the old ladies somberly dressed, weighed down by the years, but with the ardent fire of faith shining in their eyes, which gave them heart to leave for a day the little corner in the home from which they were inseparable.

"At dawn, new groups surged, undaunted, and crossed through the village without stopping for a moment, breaking the early morning silence with their beautiful hymns, the delicate harmony of the women's voices making a violent contrast with their rustic appearance. The sun was rising, though the skies presaged a storm. Dark clouds loomed directly over Fatima. Nothing would stop the crowd converging from every direction on towards the holy place, utilising every means of transport. Luxurious automobiles glided swiftly along the road, their horns sounding continually, while oxcarts dragged slowly alongside them. There were carriages of all types, Victoria chaises, landaus, and wagons fitted out with seats for the occasion and crowded to the limit . . . Donkeys trotted along the side of the road, and the countless cyclists performed real feats to keep from colliding with the vehicles.

"By ten o'clock the sky was completely hidden behind the clouds, and the rain began to fall in earnest. Swept by a strong wind and beating upon the faces of the people, it soaked the roadway and the pilgrims to the marrow of their bones. . . But no one complained or turned back, and if some took shelter under trees or walls, the great majority continued on their journey with remarkable indifference to the rain . . The place where the Virgin was alleged to have appeared is fronted to a large extent by the road which leads to Leiria, along which the vehicles bringing the pilgrims were parked. More than a hundred cars could be counted, more than a hundred bicycles, and countless numbers of other types of conveyance, among which was a bus from Torres Novas bringing a group of people of every social condition. But the great mass of the people coming from great distances, the Minho and Beira in the north, Alentejo and Algarve in the south, congregated round the holm oak tree, which, according to the children, was the pedestal chosen by the Virgin. It could be considered the centre of a large circle round which the spectators gathered to watch events.

"Seen from the road, the general effect was picturesque. The peasants sheltering under their huge umbrellas, accompanied the unloading of their provisions with the singing of hymns and the recitation of the decades of the rosary in a matter-of-fact way. People plodded through the sticky clay in order to see the famous holm oak with its wooden arch and hanging lanterns, at closer quarters. . . Where were the little shepherds? Lucia, 10 years old, and her little companions, Francisco, aged 9, and Jacinta, aged 7, had not yet arrived. Finally, about half an hour before the time when the apparition would take place, their presence was noted. The girls wore wreaths of flowers and looked like angels as they moved towards the arch. The rain fell unceasingly, but nobody minded.

"Latecomers were still arriving in cars. Groups of people were kneeling in the mud, quite unconcerned. Moved by an interior guidance, Lucia asked the people to shut their umbrellas, and in spite of the rain, she was promptly obeyed. There were so many people there, praying in such earnestness, almost in ecstasy as if their dry lips could no longer move, their hands joined, their eyes wide with wonder, people who seemed to be overpowered by the supernatural. The child asserted that the Lady had spoken to her once more, and then the sky, still overcast, began to clear overhead. The rain ceased, and the sunlight illuminated the whole landscape with all the somber effects of a wintry morning . .

"From the road where the vehicles were parked and where hundreds of people who had not dared to brave the mud were congregated, one could see the immense throng turn towards the sun, which appeared free from clouds and in its zenith. It looked like a plaque of dull silver, and it was possible to look at it without the least discomfort. It neither burned nor blinded the eyes . . . At that moment, a great shout went up and one could hear the spectators nearest at hand shouting: 'A miracle! A miracle!'

"Before the astonished eyes of the crowd, whose aspect was biblical as they stood bareheaded, pale with fright, eagerly searching the sky, the sun trembled, made sudden incredible movements outside all cosmic laws - the sun 'danced' according to the typical expression of the people.

Standing at the step of the Torres Novas bus was an old man, whose appearance in face and figure reminded one of Paul Deroulede. With his face turned towards the sun he recited the Creed in a loud voice . . . Afterwards, I saw him going up to those around him who still had their hats on, and vehemently imploring them to uncover their heads before such an extraordinary demonstration of the existence of God.

"Identical scenes were repeated elsewhere, and in one place, a woman cried out in a gasp of surprise: 'How dreadful that there are some men who do not even bare their heads before such a stupendous miracle!' People then began to ask each other what they had seen. The great majority admitted to having seen the trembling and the dancing of the sun. Others affirmed that they saw the face of the Blessed Virgin, while others swore that the sun whirled on itself like a giant wheel and that it lowered itself to the earth as if to burn it with its rays. Some said they saw it change colours successively.

"It was almost three o'clock in the afternoon. The sky was swept clear of clouds and the sun followed its course in its usual splendour, so that no one ventured to gaze at it directly.

What about the little shepherds? Lucia, who had spoken to Our Lady, was announcing with expressive gestures, as she was carried along shoulder-high by a man and passed from group to group, that the war would end and that the soldiers would return . . . But news like that, however, did nothing to increase the jubilation of those who heard it. The heavenly sign was sufficient for them: it was everything.

"Intense curiosity prevailed to see the two little girls in their wreaths of roses, and to kiss the hands of these 'little saints', one of whom, Jacinta, seemed nearer to fainting than dancing. They had so longed to see the sign from Heaven: they had seen and were satisfied and radiated their burning faith . . . The crowd dispersed rapidly, without any difficulty, without any sign of disorder, without any need for policemen to regulate them. Those who were the first to arrive were also the first to depart, running out on the roadway, traveling on foot with their footwear in a bundle on their heads or strung from their staffs. They went, with hearts overflowing with joy, to bring the good news to their hamlets that had not been wholly depopulated for the time being.

"And what of the priests? Some turned up at the place, mingling more among the curious spectators rather than among the pilgrims avid for heavenly signs and favours. Perhaps neither one nor the other succeeded in concealing their happiness, which so often transpired in triumphant guise. . .

"It only remains for those competent to do justice to the bewildering dance of the sun which, on this day in Fatima, caused Hosannas to resound from the hearts of all the faithful present, and naturally made a great impression, as people worthy of belief assured me, on the freethinkers and others without any religious conviction who had come to this now famous spot located on the poor pastureland high up on the serra.
Our Lady of Fatima