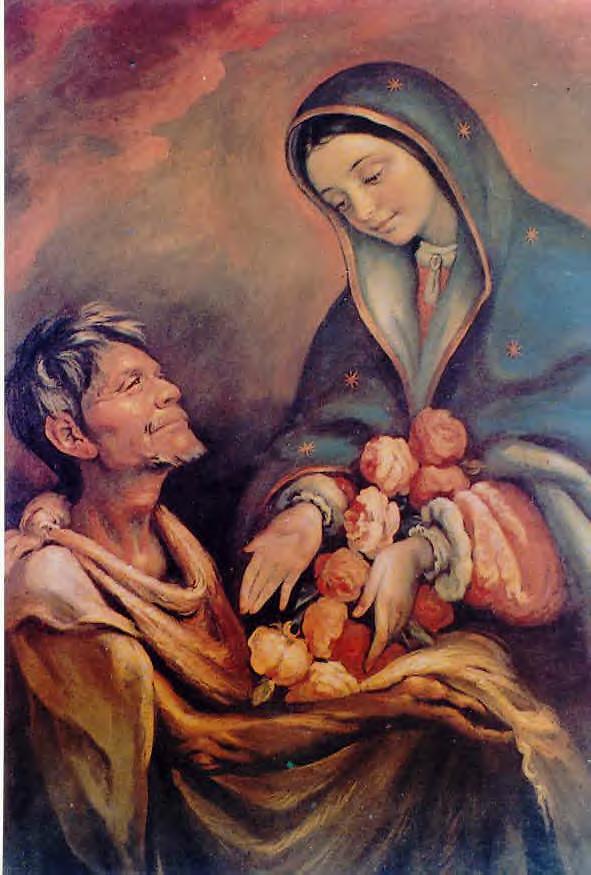 On 12 December, Juan Diego returned to Tepeyac. Here, the Blessed Mother told him to climb the hill and to pick the flowers that he would find in bloom. He obeyed, and although it was winter time, he found roses flowering. He gathered the flowers and took them to Our Lady who carefully placed them in his mantle and told him to take them to the Bishop as "proof". When he opened his mantle, the flowers fell on the ground and there remained impressed, in place of the flowers, an image of the Blessed Mother, the apparition at Tepeyac.

A Model of Humility


"I give praise to you, Father, Lord of heaven and earth, for although you have hidden these things from the wise and the learned you have revealed them to the childlike. Yes, Father, such has been your gracious will." (Mt 11, 25-26)

Who was this Juan Diego?

Most historians agree that Juan Diego was born in 1474 in the calpulli or ward of Tlayacac in Cuauhtitlan, which was established in 1168 by Nahua tribesmen and conquered by the Aztec lord Axayacatl in 1467; and was located 20 kilometers (14 miles) north of Tenochtitlan (now Mexico City).

His native name was Cuauhtlatoatzin, which could be translated as "One who talks like an eagle" or "eagle that talks".

The Nican Mopohua describes him as a 'macehualli' or "poor Indian", one who did not belong to any of the social categories of the Empire, as priests, warriors, merchants,...but not a slave; a member of the lowest and largest class in the Aztec Empire. When talking to Our Lady he calls himself "a nobody", and refers to it as the source of his lack of credibility before the Bishop.

Juan Diego devoted himself to hard work in the fields and manufacturing mats. He owned a piece of land and a small house on it. He was happily married but had no children.

Between 1524 and 1525 he was converted and baptized, as well as his wife, receiving the Christian name of Juan Diego and her wife the name of Maria Lucia. He was baptized by a Franciscan priest, Fr Peter da Gand, one of the first Franciscan missionaries.

According to the first formal investigation by the Church about the events, the Informaciones Guadalupanas of 1666, Juan Diego seems to have been a very devoted, religious man, even before his conversion. He was a solitary, mystical character, prone to spells of silence and frequent penance and used to walk from his village to Tenochtitlan, 14 miles away, to receive instruction on the doctrine.

His wife Maria Lucia became sick and died in 1529. Juan Diego then moves to live with his uncle Juan Bernardino in Tolpetlac, which was closer (9 miles) to the church in Tlatelolco -Tenochtitlan.

He walked every Saturday and Sunday many miles to church, departing early morning, before dawn, to be on time for Mass and religious instruction classes. He walked on naked feet, as all the people of his class, the macehualli. Only the higher social classes of the Aztecs wore cactlis, or sandals, made with vegetal fibers or leather. He used to wear in those chilly mornings a coarse-woven cactus cloth as a mantle, a tilma or ayate made with fibers from the maguey cactus. Cotton was only used by the upper Aztec classes.

During one of this walks to Tenochtitlan, which used to take about three and a half hours between villages and mountains, the First apparition occurred, in a place that is known as the "Capilla del Cerrito", where the Blessed Virgin Mary talked to him in his language, Nahuatl. She called him "Juanito, Juan Dieguito" , "the most humble of my sons", "my son the least", "my little dear". She asked him to go to the Bishop and to request in her name that a shrine be built at Tepeyac, where she promised to pour out her grace upon those who invoked her. The Bishop, who did not believe Juan Diego, asked for a sign to prove that the apparition was true. On 12 December, Juan Diego returned to Tepeyac. Here, the Blessed Mother told him to climb the hill and to pick the flowers that he would find in bloom. He obeyed, and although it was winter time, he found roses flowering. He gathered the flowers and took them to Our Lady who carefully placed them in his mantle and told him to take them to the Bishop as "proof". When he opened his mantle, the flowers fell on the ground and there remained impressed, in place of the flowers, an image of the Blessed Mother, the apparition at Tepeyac.

He was 57 years old, certainly an old age in a time and place where the male life expectancy was barely above 40.

After the miracle of Guadalupe and with the Bishop's permission, Juan Diego moved to a room attached to the chapel that housed the sacred image, after having given his business and property to his uncle, spending the rest of his life as a hermit. There he cared for the church and the first pilgrims who came to pray to the Mother of Jesus, and propagating the account of the apparitions to his countrymen. Much deeper than the "exterior grace" of having been "chosen" as Our Lady's "messenger", Juan Diego received the grace of interior enlightenment and from that moment, he began a life dedicated to prayer and the practice of virtue and boundless love of God and neighbour.

Juan Diego deeply loved the Holy Eucharist, and by special permission of the Bishop he received Holy Communion three times a week, a highly unusual occurrence in those times.

Juan Diego, the humblest of servants, who said to the Blessed Virgin: "I am a nobody, I am a small rope, a tiny ladder, the tail end, a leaf" is truly a model of humility for us to follow!

The miraculous image of Our Lady of Guadalupe, shows a woman with native features and dress. She is supported by an angel whose wings are reminiscent of one of the major gods of the traditional religion of that area. The moon is beneath her feet and her blue mantle is covered with gold stars. The black girdle about her waist signifies that she is pregnant. Thus, the image graphically depicts the fact that Christ is to be "born" again among the peoples of the New World, and is a message as relevant to the "New World" today as it was during the lifetime of Juan Diego.
Our Lady of Guadalupe