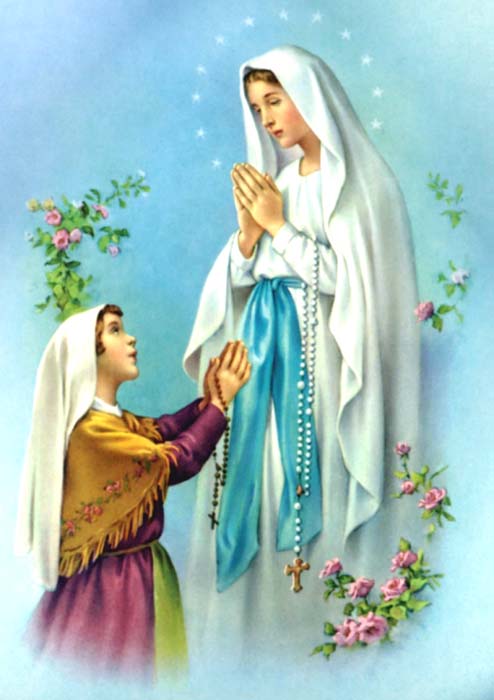 * It seems that the Blessed Virgin Mary herself wished to confirm by some special sign the definition, which the Vicar of her Divine Son on earth had pronounced amidst the applause of the whole Church. For indeed four years had not yet elapsed when, in a French town at the foot of the Pyrenees, the Virgin Mother, youthful and benign in appearance, clothed in a shining white garment, covered with a white mantle and girded with a hanging blue cord, showed herself to a simple and innocent girl at the grotto of Massabielle. And to this same girl, earnestly inquiring the name of her with whose vision she was favored, with eyes raised to heaven and sweetly smiling, she replied: "I am the Immaculate Conception."

Lourdes is a town in the south-west of France, where millions of pilgrims, as well as other people, go to each year. Our Lady of Lourdes is the name used to refer to the Marian apparition that appeared before various individuals in separate occasions around Lourdes, France. The apparitions of Our Lady of Lourdes began on 11 February 1858, when Bernadette Soubirous, a 14-year-old peasant girl from Lourdes admitted, when questioned by her mother, that she had seen a "lady" in the cave of Massabielle, about a mile from the town, while she was gathering firewood with her sister and a friend. Similar appearances of the "lady" took place on seventeen further occasions that year. Bernadette often fell into an ecstasy. The mysterious vision she saw in the hollow of the rock Massabielle was that of a young and beautiful lady. "Lovelier than I have ever seen" said the child. Bernadette Soubirous was canonized as a saint, and many Christians believe her apparitions to have been of the Blessed Virgin Mary. Pope Pius IX authorized the local bishop to permit the veneration of the Virgin Mary in Lourdes in 1862.

Our Lady of Lourdes History On 11 February 1858, Bernadette Soubirous went with her sisters Toinette and Jeanne Abadie to collect some firewood and bones in order to be able to buy some bread. When she took off her shoes and stockings to wade through the water near the Grotto of Massabielle, she heard the sound of two gusts of wind (coups de vent) but the trees and bushes nearby did not move. She saw a light in the grotto and a girl, as small as she was, dressed all in white, apart from the blue belt fastened around her waist and the golden yellow roses, one on each foot, the colour of her rosary. Bernadette tried to keep this a secret, but Toinette told her mother. After parental cross-examination, she and her sisters received corporal punishment for their story.

Three days later, Bernadette returned to the Grotto with the two other girls. She had brought holy water as a test that the apparition was not of evil provenance, however the vision only inclined her head gratefully when the water was thrown. Bernadette's companions reportedly became afraid when they saw her in ecstasy. Bernadette remained ecstatic when they returned to the village. On 18 February, she was told by the Lady to return to the Grotto over a period of two weeks. The Lady allegedly said: I promise to make you happy not in this world but in the next. After the news spread, the police and city authorities began to take an interest. Bernadette was prohibited by her parents and police commissioner Jacomet to ever go there again, but she went anyway. On 24 February the apparition asked for prayer and penitence for the conversion of sinners.

The next day, Bernadette was asked to dig in the ground and drink the water of the spring she found there. This made her dishevelled and caused dismay among her supporters, but revealed the stream that soon became a focal point of pilgrimage. At first muddy, the stream became increasingly clean. As word spread, this water was given to medical patients of all kinds, and numerous miracle cures were reported. Seven of these cures were confirmed as lacking any medical explanations by Professor Verges in 1860. The first person with a “certified miracle” was a woman, whose right hand had been deformed as a consequence of an accident. When the anti-clerical government fenced-off the Grotto and issued stiff penalties for anybody trying to get near the off-limits area, the Bishop of Tarbe was asked to reopen it, He said," Only the Emperor can reopen the grotto. Lets see who is stronger, Our Lady or the Emperor?" In the process, Lourdes became a national issue in France, resulting in the intervention of emperor Napoleon III with an order to reopen the grotto on 4 October 1858.

Bernadette, knowing the localities rather well, managed to visit the barricaded grotto under the protection of darkness. There, on March 25, she was told: " I am the Immaculate Conception" ("que soy era immaculada concepciou"). On Easter Sunday, 7 April, her examining doctor stated that Bernadette, in ecstasy, was observed to have held her hands over a lit candle without receiving any burns. On 16 July, Bernadette went for the last time to the Grotto. I have never seen her so beautiful before. The Church, faced with nation-wide questions, decided to institute an investigative commission on 17 November 1858. On 18 January 1862, Bishop Laurence, the Bishop of Tarbes, gave the solemn declaration: "We are inspired by the Commission comprising wise, holy, learned and experienced priests who questioned the child, studied the facts, examined everything and weighed all the evidence. We have also called on science, and we remain convinced that the Apparitions are supernatural and divine, and that by consequence, what Bernadette saw was the Most Blessed Virgin. Our convictions are based on the testimony of Bernadette, but above all on the things that have happened, things which can be nothing other than divine intervention".. These events established the Marian veneration in Lourdes, which together with Fátima, is one of the most frequented Marian sites in the world, and to which between 4 and 6 million pilgrims travel annually.

The verity of the apparitions of Lourdes is not an article of faith for Catholics. Nevertheless all recent Popes visited the Marian shine. Benedict XV, Pius XI, and Pius XII as papal delegate. He also issued with Le Pelerinage de Lourdes a Lourdes encyclical on the hundredth anniversary of the apparitions in 1958.

Popes and Lourdes In the past 150 years, popes have taken great interest in Marian apparitions such as Fatima and Lourdes. Pope Pius IX approved the veneration in Lourdes and welcomed and supported the building of the Cathedral in 1870 to which he donated several gifts. He approved the veneration and promoted Marian piety in Lourdes with the granting of special indulgences and the formation of local Lourdes associations. Pope Leo XIII crowned Our Lady of La Salette and issued an apostolic letter Parte Humanae Generi in commemoration of the consecration of the new Cathedral in Lourdes in 1879. Pope Benedict XV, when archbishop of Bologna, organized a diocesan pilgrimage to Lourdes, asking for the veneration of the Immaculate Virgin there. In 1907, Pope Pius X introduced the feast of the apparition of the Immaculate Virgin of Lourdes. In the same year he issued his encyclical Pascendi Dominici Gregis, in which he specifically repeated the permission to venerate the virgin in Lourdes.

During the pontificate of Pope Pius XI reported apparitions occurred in Our Lady of Beauraing and Our Lady of Banneux. In 1937, Pius XI nominated Eugenio Pacelli as his Papal Delegate to personally visit and venerate in Lourdes. Pius XI actively furthered the venerations in Lourdes by beatifying Bernadette Soubirous on 6 June 1925. He canonized her on the Feast of the Immaculate Conception on 8 December 1933 and determined her Feast Day to be 18 February. Bernadette, who suffered from asthma and bone cancer, had lived on the borderline of social acceptance within the Church during her life-time. 18 February is the day the Virgin Mary reportedly told Bernadette that she did not promise to make me happy in this world, but in the next.

Pope Pius XII, commemorating the hundredth anniversary of the Immaculate conception dogma, announced a Marian year, the first one on Church history. In his encyclical Fulgens Corona, he described the events in Lourdes as follows:

* It seems that the Blessed Virgin Mary herself wished to confirm by some special sign the definition, which the Vicar of her Divine Son on earth had pronounced amidst the applause of the whole Church. For indeed four years had not yet elapsed when, in a French town at the foot of the Pyrenees, the Virgin Mother, youthful and benign in appearance, clothed in a shining white garment, covered with a white mantle and girded with a hanging blue cord, showed herself to a simple and innocent girl at the grotto of Massabielle. And to this same girl, earnestly inquiring the name of her with whose vision she was favored, with eyes raised to heaven and sweetly smiling, she replied: "I am the Immaculate Conception."

Le Pelerinage de Lourdes, the only encyclical written on Lourdes, was issued on the centenary of the apparitions at Lourdes. The encyclical represents one of the strongest pronouncements of the papal magisterium on Marian apparitions in the history of the Catholic Church. The Pope presents Mary as the model of alternative life-style. The school of Mary teaches everybody selflessness and charity.

* In the school of Mary one can learn to live, not only to give Christ to the world, but also to await with faith the hour of Jesus, and to remain with Mary at the foot of the cross. Wherever providence has placed a person, there is always more to be done for God's cause. Priests should with supernatural confidence, show the narrow road which leads to life. Consecrated and Religious fight under Mary's banner against inordinate lust for freedom, riches, and pleasures. In response to the Immaculate, they will fight with the weapons of prayer and penance and by triumphs of charity. Go to her, you who are crushed by material misery, defenseless against the hardships of life and the indifference of men. Go to her, you who are assailed by sorrows and moral trials. Go to her, beloved invalids and infirm, you who are sincerely welcomed and honoured at Lourdes as the suffering members of our Lord. Go to her and receive peace of heart, strength for your daily duties, joy for the sacrifice you offer.
Our Lady of Lourdes