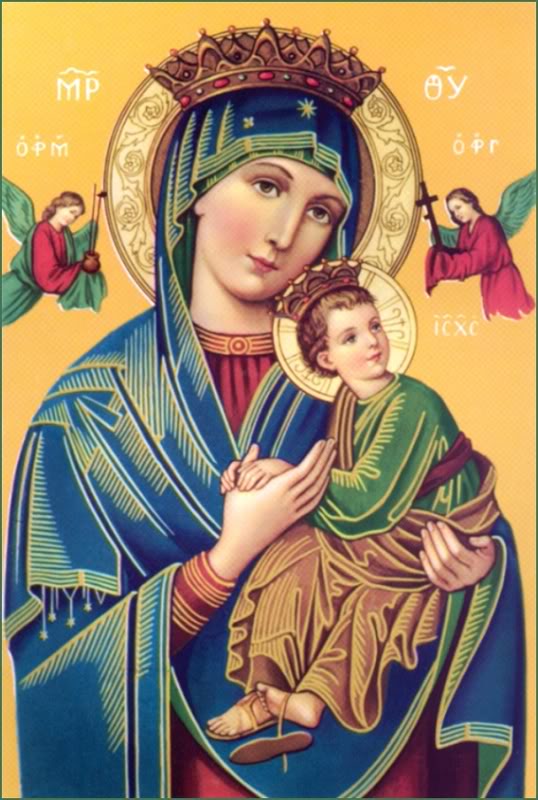 Our Lady of Perpetual Help

“O blessed Mother, you are like a goldsmith preparing a beautiful object. All those who see the object are filled with gladness and present precious stones or gold in order to perfect it. Thus, dear Mother, you offer help to everyone struggling to rise to God, and leave no one without your consolation. You can therefore well be called the blood of the heart of God. Just as each member of the body receives life and strength from the blood, so too everyone comes to life again after sin and is made more fruitful before God through you.”

HISTORY OF OUR LADY OF PERPETUAL HELP


The origin of the Our Lady (Mother) of Perpetual Help icon is uncertain, although many have thought that it was painted by St. Luke and venerated in Constantinople until that Holy City fell in 1453. The Byzantine style and Greek lettering are consistent with an icon of Eastern origin.

While we may not know the exact origins of Our Mother of Perpetual Help, we do know the next part of the story -- from the original picture itself. A parchment attached to the painting tells the story of how it got to Rome.

According to this record, a merchant from the island of Crete heard stories of many miracles that occurred around a fabulous painting on the island. Wanting this power for himself, he stole the painting and packed it away with his other wares. His travels led him, and the stolen picture, to Rome, where he suddenly fell ill. As he lay dying, he told the whole story of the stolen picture to his friend, a Roman, who was caring for him during his illness. His last request was that the Roman take the picture and have it placed in a church where it would help many people.

The Roman's wife, however, put the picture in her bedroom. Mary made her opinion of this situation known by appearing to the Roman in a series of visions. Each time, she asked him to stop hoarding the picture and start sharing it with others. And each time, the Roman ignored her. After being rejected by the adults, Mary visited their six-year-old daughter. The daughter announced that Mary had commanded that the picture be placed in a church between St. Mary Major and St. John Lateran -- a church called St. Matthew's. At last, the Roman obeyed, and the picture was placed in the care of the Augustinians on March 27, 1499.

It's hard to understand why Mary would choose such a place to be honored. St. Matthew's was a small church in a barren place far from the center of the city. Yet the rich and the poor, the powerful and the lowly alike, traveled the rough stone path to the church to seek comfort from Our Mother of Perpetual Help -- and to learn from her humility.

One man, however, was not impressed. In 1798, Napoleon's general ordered the destruction of thirty churches when the French invaded Rome. St. Matthew's was one of them. After the soldiers left, those who loved Mary searched the ruins but could find no trace of the picture. There seemed to be no doubt that their beloved picture had perished with the church.

Almost half a century later and miles away, an altar boy named Michael Marchi listened to a sacristan's tales of the past. The sacristan, named Augustine Orsetti, pointed to a picture of Mary in the chapel and said, "See that picture, Michael? It is old -- very old. It used to hang in St. Matthew's Church, where many people came to pray to the Mother of God." The painting, he said, had been rescued at the last minute, hidden from the marauding general in a humble cart, and transported secretly to this chapel. "Remember that," the sacristan told him. Michael Marchi remembered.

Years later, Father Michael Marchi, by then a Redemptorist, was in Rome. In 1853, Pope Pius IX commanded the Redemptorists to establish their world headquarters in Rome.

After much searching and prayer, the Redemptorists bought a huge estate. When they inspected their new property, they found a house, barns, stables, gardens -- and the ruins of an old church. Inquiring into the history of the church, the Redemptorists learned that its name was St. Matthew's, and that it once had housed a miraculous painting, a painting that had been lost.

Even as they ruefully shook their heads at the loss of such a treasure, Father Michael stunned his associates by telling them that not only did the picture still exist, but he knew where it was.

After three years of prayer, the Redemptorists decided to ask that the picture be brought back to Rome. When they told Pope Pius that it was Mary's own wish that she be enshrined between St. Mary Major and St. John Lateran -- where the Church of St. Alphonsus now stood -- the Pope immediately commanded the return of the painting. Flowers and banners greeted Our Mother of Perpetual Help on April 26, 1886, and miracles attended her procession -- including the cure of a four-year-old boy suffering from a brain illness. After 75 years, Our Mother of Perpetual Help had finally returned home.

But Pius IX didn't give the picture to the Redemptorists as a gift. He gave it to them as a mission. He told them, "Make Our Mother of Perpetual Help known throughout the world." The Redemptorists embraced this command wholeheartedly by distributing reproductions of her picture and talking about her in missions and homilies around the world.

Their efforts yielded impressive results. By the turn of the century, 1.8 million Spaniards belonged to the Archconfraternity of Our Mother of Perpetual Help, ten thousand shrines and altars were dedicated to her in France, and devotions in her honor were observed in several thousand churches all over America. These services, or novenas, of Our Mother of Perpetual Help drew thousands of people. Churches in St. Louis, New Orleans, Detroit, Chicago, and Boston had to hold eight or ten services a day to accommodate everyone who wanted to honor Mary, and in New York, the service was even broadcast over the radio.

PRAYER TO OUR LADY OF PERPETUAL HELP


O Mother of Perpetual Help, grant that I may ever invoke thy most powerful name, which is the safeguard of the living and the salvation of the dying. O Purest Mary, O Sweetest Mary, let thy name henceforth be ever on my lips. Delay not, O Blessed Lady, to help me whenever I call on thee, for, in all my needs, in all my temptations I shall never cease to call on thee, ever repeating thy sacred name, Mary, Mary.

O what consolation, what sweetness, what confidence, what emotion fill my soul when I pronounce thy sacred name, or even only think of thee. I thank God for having given thee, for my good, so sweet, so powerful, so lovely a name. But I will not be content with merely pronouncing thy name: let my love for thee prompt me ever to hail thee, My Lady, Mother of Perpetual Help! Amen.

REVELATION OF OUR LADY OF PERPETUAL HELP

The daughter's words to the Lady in praise of her virtue and beauty, and the Virgin's answer confirming her praise, and the Son's comparison of his Mother to a goldsmith.

Book 4 - Chapter 19
The Prophecies and Revelations of St. Bridget of Sweden


“Sweet Mary, fresh beauty, shining beauty! Come and listen to me, so that my ugliness may be purified and my love enkindled! Your beauty gives three gifts to the head. First, the cleansing of the memory so that God's words enter smoothly; second, the pleasant retention of the words heard; third, their zealous communication to one's neighbor. Your beauty also grants three things to the heart. First, it removes the heavy burden of sloth, when your love and humility are contemplated; second, it brings tears to the eyes, when your poverty and patient suffering are brought to mind; third, it gives the heart a sweet inner fire, when the memory of your devotion is sincerely recalled.

The Mother answers: ”May God, my beauty, be blessed! It is he who has given you such words to speak! And so I tell you that the most ancient beauty, the eternal and highest beauty, which made and created me, shall be your comfort. The beauty that is oldest and yet new, renewing all things, which was in me and was born of me, shall teach you wonders. The most desirable beauty, which gives joy and delight to all, shall inflame the spirit of your love. So trust in God, for when the heavenly beauty appears, all earthly beauty will crumble and be regarded as dung.”

Then God's Son said to his Mother: ”O blessed Mother, you are like a goldsmith preparing a beautiful object. All those who see the object are filled with gladness and present precious stones or gold in order to perfect it. Thus, dear Mother, you offer help to everyone struggling to rise to God, and leave no one without your consolation. You can therefore well be called the blood of the heart of God. Just as each member of the body receives life and strength from the blood, so too everyone comes to life again after sin and is made more fruitful before God through you.” - From (The Prophecies and Revelations of St. Bridget of Sweden)
Our Lady